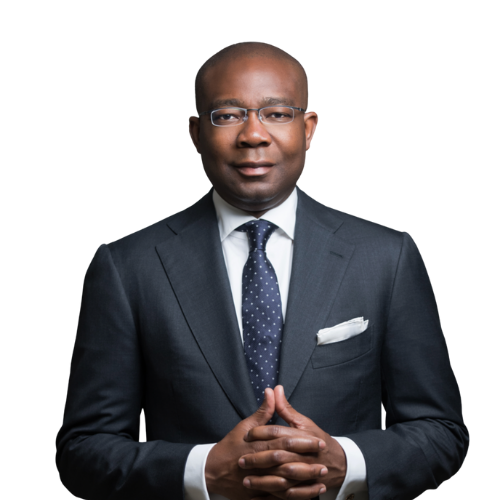 Mr. Aigboje Aig-Imoukhuede is an investor, banker and philanthropist with a track record of major accomplishments in the profit and non-profit sectors. As co-founder of the Tengen Family Office, he oversees a multibillion-dollar portfolio of investments encompassing banking, finance, insurance, technology, real estate and energy.

Through the Aig-Imoukhuede Foundation and its subsidiaries, Aigboje and his wife, Ofovwe, manage a significant family commitment focused on building Nigeria’s next generation of government leaders, helping transform public sector effectiveness, and improving access to quality primary health care.

Following a management buy-in transaction, Aig became CEO of Nigeria’s Access Bank in 2002 and led its transformation from a minor player into one of the country’s top five banks. Since retiring as Access Bank CEO in 2013, Aig has focused on building the Coronation ecosystem, a unified financial services platform which he established through the Coronation Capital Cornerstone Fund. The ecosystem comprises “long money” financial service businesses operating in Nigeria and Ghana.

He is Chairman of the Board of Trustees of the Financial Market Dealers Association (FMDA) and was founding Chairman of the FMDQ Securities Exchange. He was elected Council President of the Nigerian Stock Exchange in 2013, becoming the first African to chair two national exchange platforms. As President of the Exchange, he championed its demutualisation, which was successfully completed in 2021.

He was appointed a member of Oxford University’s Blavatnik School of Government International Advisory Board in 2017. He holds a law degree from the University of Benin and was called to the Bar in Nigeria. He also holds a Trium MBA awarded jointly by the London School of Economics, New York University and HEC Paris. Aig is the author of the bestseller Leaving the Tarmac: Buying a Bank in Africa.